Ty Cerdd and ISCM
Sakura was shortlisted for the ISCM World Music Days festival in Vancouver.

Bournemouth Symphony Orchestra Composer Day
My piece ‘Song of the Awakening Dawn’ was performed by Kokoro, the BSO’s contemporary music group on 28th Feb 2015 as part of a day of workshops with Colin Matthews.

Pierrot Project
I was commissioned to set Giraud’s ‘Ivresse de Lune’ as a companion piece to Mondestrunken of Schoenberg’s Pierrot Lunaire. It was performed by the Dr. K Sextet and Lesley Jane Rogers in October 2014 alongside works of art inspired by Pierrot.

Also, my work Genesis…Seed returned to Club Inégales on 22 Jan 2015 in a new extended version, alongside part 1 of Shoenberg’s Pierrot Lunaire.

MusArc
A year long collaboration with London-based choir Musarc as part of Sound and Music’s Portfolio Scheme culminating in a performance of Only Breath at Christ Church Spitalfields in December 2014.

Cheltenham Music Festival 2013
My piece Genesis…Seed was written for the Dr K Sextet at the 2013 Cheltenham Festival Composers Academy and performed at the Parabola Arts Centre on 6th July.

The Panufnik Legacies CD
My piece Sakura was one of ten chosen to be recorded by the LSO as a celebration of the first 5 years of the Panufnik Scheme.

London Symphony Orchestra
I was awarded the 2011 LSO Panufnik 5’ commission! The world première of Anahata was conducted by Nicholas Collon at the Barbican on 24th March 2013.
In 2010 I wrote Sakura through the LSO Panufnik Scheme. It was performed in a workshop on the 7th January 2011 conducted by François Xavier Roth. 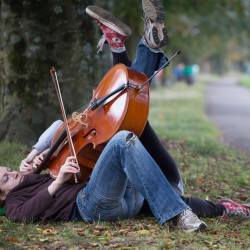